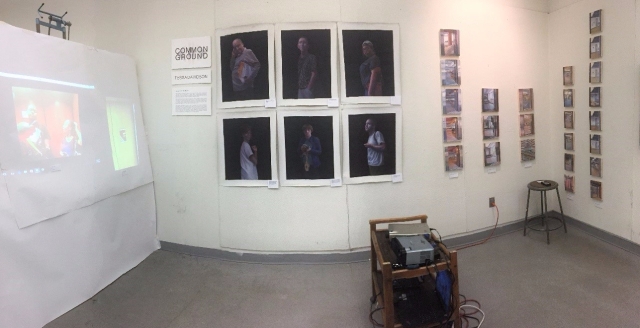 Floor moving, doors opening and closing, a constant barrage of strangers coming in and out… The Common Ground elevator project considers these fleeting public interactions and takes them to the next level.  The project derived from a series of performances which took place in seven different public elevators in Little Rock, Arkansas in the fall of 2016.  The performance sessions involved the artist painting multiple floors of a building from a single vantage point within an operating elevator.  Each session was recorded and lasted approximately eight hours.  The project’s installation contains a set of portraits with a low-fi naturalistic sensibility, painted from photographic stills taken from the project’s video footage.  The selection of small panels were painted on site and record the impressions of each floor as the elevator doors opened.  The time-lapse video captures the movements and passenger interaction within the elevators.

Elevator Interior and Floors 1-5, Center for Technologies, University of Arkansas in Little Rock